These Are Dark Times

by The Tyler Trudeau Attempt 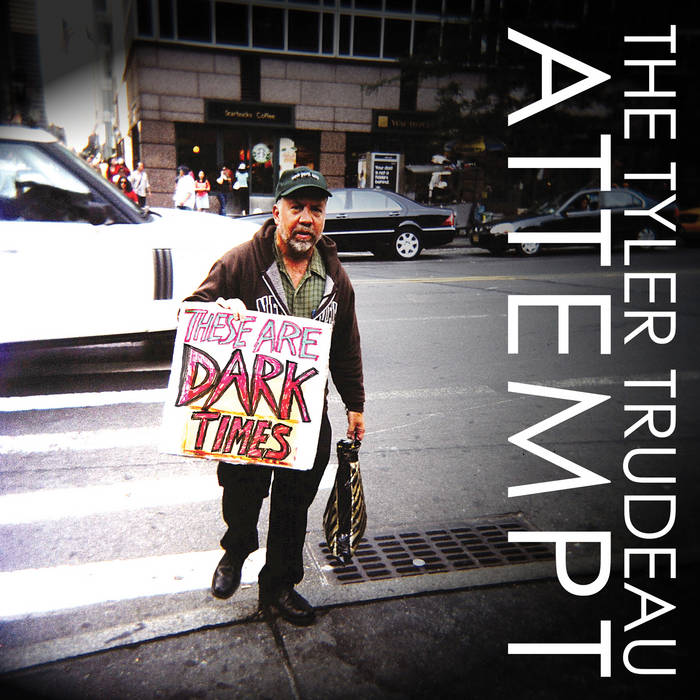 If the fruits of Tyler Trudeau’s recent unemployment are records such as the ones he’s been turning out, then may he never find work. It hasn’t been long since we last heard from the Brooklyn-via-New Haven songwriter/singer/multi-instrumentalist — the debut album by his pure-pop one-man band, Women’s Basketball, the acclaimed An Octopus, but Like, an Octopus with Massive Wings, and Junk, was one of February Records’ inaugural releases in January of this year. And this spring, his career-spanning compilation CD-R Hey Turdo! unearthed some surprising stuff, out-of-print or previously unreleased tracks that would’ve counted as album highlights for a lesser songwriter.

Now Trudeau’s firing another salvo with his main band, the wide-ranging pop group The Tyler Trudeau Attempt. “These Are Dark Times” is the lead single from the Attempt’s upcoming album, Something, Anything Else (label and release date to be determined). The album stands as a handy summary of the band’s garage-rocking pan-pop, which pinches ideas from early punk rock, Brill Building pop, surf rock, jangle-pop, post-punk, the British Invasion and whatever else catches their restless fancy. Trudeau has often claimed, somewhat disingenuously, “I write three-minute pop songs about feeling bad.” Add 10 seconds to that statement, though, and that’s “These Are Dark Times.” The record is backed with backed with “We’ll Win This One Yet.”

Originally a solo home recording project commenced during Trudeau’s high school years, The Tyler Trudeau Attempt has been a gigging live band for over half a decade. Today’s incarnation of the band includes current and former members of the bands Apse, The Cavemen Go, Shark and FayRey. They are Tyler Trudeau (vocals, guitars), John Mordecai (keyboards, vocals), Alex Larson (bass) and Bob Breychak (drumkit).