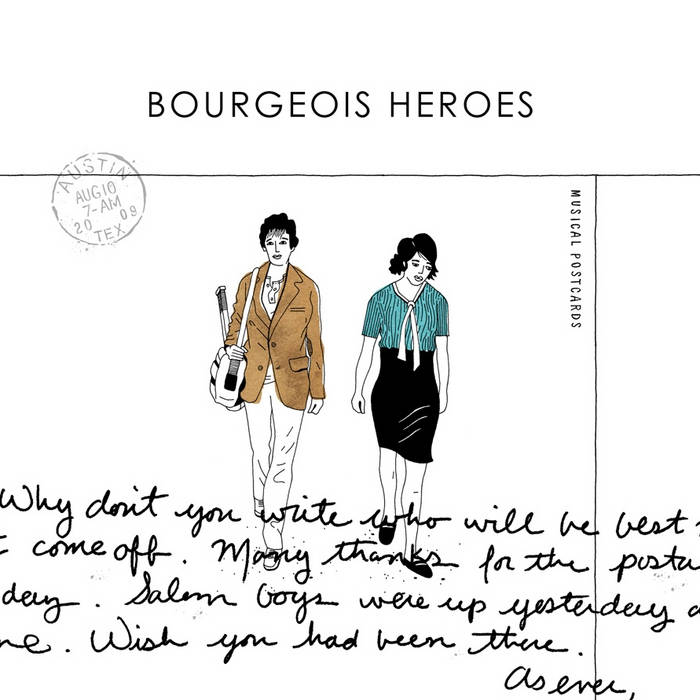 Purchase the album at bourgeoisheroes.bandcamp.com

Elise and Jason are Bourgeois Heroes. The band began in the spring of 2002 on a roadtrip to Memphis. Once they arrived in Tennessee, they purchased a drum kit and an electric guitar and out to record their frst ramshackle single the following evening at Sun Studio.

Bourgeois Heroes is currently in a long distance relationship, communicating musical ideas between Austin, Tex., and Northampton, Mass. Their latest effort, the Musical Postcards EP, is a document of this arrangement. Demos and versions of songs at various stages were mailed by the post and feedback was often returned over the telephone or on the back of a postcard.

The recording began at Jason’s home on a four-track tape cassette machine. Justin Pizzoferrato (Dinosaur Jr., Hush Arbors, Sonic Youth) engineered much of the rest of the work at Bank For Recording. Henning Ohlenbusch provided the baroque string arrangements at Rub Wrongways Studio. After these elements came together, everything was mixed down to a 2-track stereo tape, creating a homemade feel that contains both hi-f and lo-f sounds.